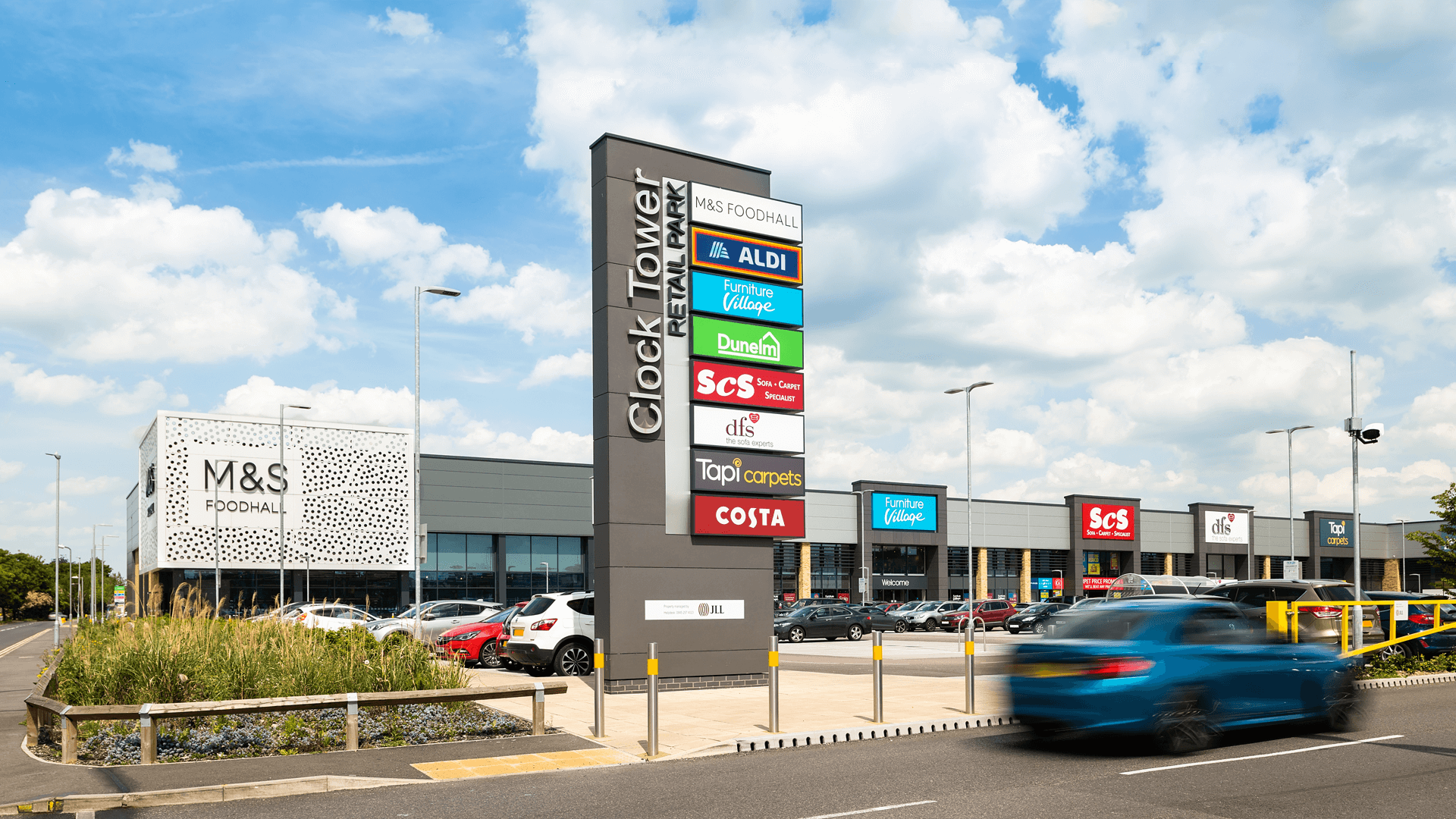 The opening of several major stores and food and beverage outlets at Clock Tower Retail Park in Chelmsford, including Aldi, Furniture Village, DFS, Tapi and Costa, marked a significant moment in the life of a site once occupied by the Britvic soft drinks factory. When the Marks & Spencer Foodhall officially opened there in November 2017, the local press were on-hand to report how ‘customers streamed through the doors after a year of hard work to bring the disused site, off Westway, back to life.’

Just over 18 months on from that opening, we returned to Clock Tower Retail Park to see how our design for the scheme was performing and gather some opinion from the current tenants.

We were originally asked to develop proposals for this brand new retail park at Westway, Chelmsford for our client Aberdeen Standard Investments and Exton Estates. The location for the park proved to be very interesting, sitting as it did on the site of the former Britvic soft drinks factory. Opened in 1955, the factory had been a huge employer in Chelmsford and at its height was bottling 13 million soft drinks a year. It was therefore important that the design acknowledged the site’s history.

A decision was made to replicate the factory’s iconic clock tower that had been a popular local landmark on the city skyline and from which the retail park now takes its name. The new tower features unique lighting designed to mimic the bubbles in a fizzy drink; they are illuminated and rise up the tower on the hour. Looking at it now, it’s immensely gratifying to see how the new clock tower has become as iconic as the original and, importantly, how it acts as a beacon for the retail park itself.

It’s equally satisfying to see that the crisp contemporary retail architecture featuring a simple and refined pallet of materials including glass, brick and dark metal cladding, is performing well. It’s interesting also to reflect on how the design has proved to be highly on-trend – for instance some elements of the façade incorporated design features which are currently very in vogue, such as the unique signature laser-cut signage cube to the M&S unit which incorporates an organic perforated design and bookends the retail terrace. It looks great day and night and we’re now installing a similar system on a façade enhancement scheme in York.

Likewise, it’s pleasing to see how our choice of cladding for the Costa unit at the front of the park picks up on the current trend for brassy tones. In seeking an alternative to cor-ten steel, we found a similar product with brassy-orangey tones – not only did this turn out be a lot more cost effective but it’s also proving to require a lot less maintenance as well. Looking at how this has performed in Chelmsford, we’re now proposing to use it elsewhere.

More importantly for us, however, is seeing and hearing that that the park is trading well and tenants are happy. Speaking to the store managers, the overwhelming impression we get is that the car park is always very busy, even during the daytime, and that the stores are trading well in comparison with other nearby facilities. Tenants attributed this success to the great visibility of the stores from the main highway approach and from the car park areas.

The clock tower helps, of course, because it clearly advertises the retail park. However, the park is also an ‘L-shaped’ format and we designed it so that every unit faces the road. In all of our retail park projects we try to get the signage as tall as possible so that it’s visible – admittedly, this is not always the preference for the planners, but at Clock Tower Retail Park we were able to project the parapet line, not only to break down the mass, but also allowing us to push up the signage and giving it more prominence from the road. From the tenant feedback, this decision is paying dividends and clearly works well for trading.

Of course there are always things that, on reflection, one might do differently, for instance wider paving or the inclusion of more amenities and events spaces, but overall Clock Tower Retail Park has turned out to be a very successful project, bringing big-name brands and employment to the local area.

Arguably, most major towns in the UK now have an overcapacity of retail parks and, in the current retail climate, only the very best will survive. In carefully considering its design to ensure quality and endurable finishes, well-conceived high-quality public realm and a greater visibility than all the other retail parks in the area, Clock Tower Retail Park was able to attract anchor tenants Aldi at one end and M&S at the other, alongside Furniture Village, DFS and Tapi Carpets amongst others. That fact alone is a statement, proving that it is the best park in the area and, from the perspective of both a design and tenant mix, guarantees it a successful future.

You can read more about this project in our portfolio.